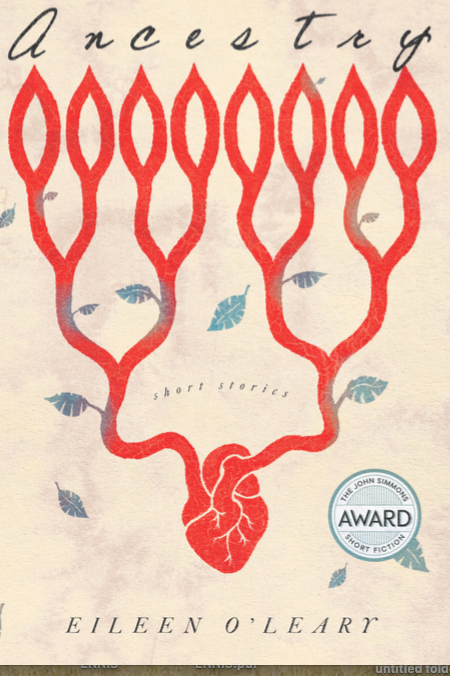 “These exquisite stories showcase Eileen O’leary’s prodigious talent and singular voice. Ancestry is rich with humor and pathos, and features some of the sharpest dialogue I’ve ever read. An absolute delight.” – Kirstin Chen, author, Bury What We Cannot Take

“Ancestrytakes us on a dazzlingly eclectic ride alongside a cast of human beings trying, with varying degrees of desperation, to simply live lives worth living. One hears hints of George Saunders here, but also Deborah Eisenberg and Ann Beattie: narratives with the clarity of a ringing bell simultaneously garbed in a complexity that feels imminent and irreversible. O’Leary is a talent not to be missed.” – Christian Kiefer, author, Phantoms

“’He would adjust,” Eileen O’Leary writes of a grieving newcomer to Nepal, in this compassionate and continent-spanning collection. ‘He would learn the customs and some words and a way to get around. Wasn’t that what people did?’ It’s what O’Leary’s people do; confronted with the gulf between dreams and reality, they bend but for the most part don’t break.” – Tom Drury, judge, John  Simmons Short Fiction Award.

“Witty yet tender, Ancestryis a remarkable collection. It subtly explores the dark matter at the center of every life, asking the wicked and important questions. The answers startle and uplift – they remind us how large every human heart is.” – Derek Palacio, author, The Mortifications

“Eileen O’Leary is a connoisseur of the endlessly clever, endlessly futile ways we try to escape ourselves. With wit as crisp as a dry martini, she sees right through us – parents and children, divorces and dinner parties, paper-thin identities, the giddy free-fall of psychic disintegration – and surgically extracts these elegant and companionable reports of private apocalypse.” – Brian Conn, author,The Fixed Stars


I attended the Iowa Writers’ Workshop for fiction and finally finished my MFA in '19 at Ashland University. In between I won a Tennessee Williams playwriting scholarship to the Sewanee Writers’ Conference. My screenplay, My Eye on You, won second-rounder finalist in comedy at the Austin film festival. My plays won three Best New Play awards, the Riverwalk Theatre Black Box award, stagings on both coasts and membership in the Dramatists Guild. I've produced and directed as well as taught in outreach programs. (My teaching script for high school students is on the Wharton Center for the Arts website under Education, Young Playwrights’ Festival/sample script.) I've given lectures on Rathcroghan, Ireland, where my father was born and on Joyce's Ulysses, where my love of reading was born.
I'm from New Jersey, daughter of immigrants, trying to sell my first novel BRIGHT CHARM and at work on my second.  A new short story, GET RICH QUICK, will be published in the spring issue of the Catamaran Literary Reader.